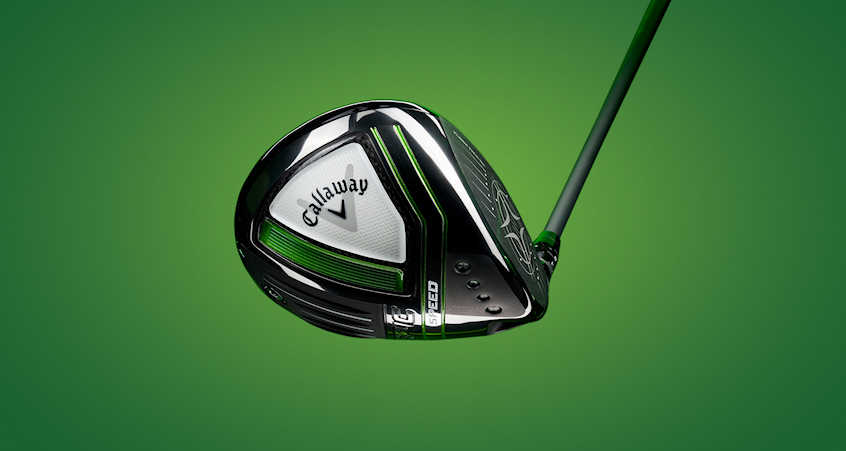 Callaway just released its new Epic driver line: Epic Speed, Epic Max and Epic Max LS which are now available for fittings at a Cool Clubs location near you. And keeping with a similar theme over the past few years, Callaway is begging to be noticed for one thing: speed. The three iterations of the new Epic line are the result of the first time that AI has been used to design Callaway’s AI face and Jailbreak technology at the same time. Chalk one up for the supercomputers. We dig their style.

First, let’s address all the social media buzz around that tiny green thing all the TOUR players were holding in their hands in their Instagram posts over the past few weeks. Enter the Callaway AI Speed Frame which builds upon the AI Speed Face and Jailbreak tech from Callaway – creating even more stiffness on the crown/sole connection and additional horizontal and torsional stiffness. The result? You guessed it – more speed. Oh, and it’s not green. We promise.
Here’s the breakdown of the three models.

The Epic Speed is built on the cyclone shape we saw with last year’s MAVRIK and is touted as the most aerodynamic of the three new models. A taller and flatter crown and tailing edge is a touch more aggressive and is said to produce lower drag during the downswing. For forgiveness in the Epic Speed driver, we head back to the AI Face design thanks to a more forward center of gravity and an overall more balanced clubhead.

Relative to the other two Epic models, the Epic Max offers the highest MOI, making it the most conventionally forgiving. Pretty straightforward. The Epic Max features Callaway’s sliding, 17-gram weight track which is said to allow upwards of 16 yards of shot-shape correction. It’s not a slice killer, but should help a player whose goal is to correct it.

Guess what LS means. Did you guess low spin? The Epic Max LS aims to reduce spin, for sure, but also was designed to be as neutral as possible and bring the full suite of Callaway technology to the table without favoring one over the other. Simply put, it’s a tech-chocked clubhead designed to let the golfer do the bulk of the work. Refreshing.

The Epic Max LS is designed to get out of the way, not offer any specific protections (above and beyond the standard mishit stuff), not enhance anything and not kill all the spin. The idea is to bring the full suite of Callaway technology to the table.

Here are some of the features and advantages of Callaway’s EPIC driver line:

High Forgiveness
Callaway’s Most Forgiving Epic Ever
Epic MAX creates exceptionally high forgiveness, starting with a lighter, stronger Triaxial Carbon material that saves over 19 grams of weight vs. titanium. Callaway engineers have redistributed that saved weight to promote high launch and more forgiveness. This driver delivers an exceptional combination of a deep CG, draw bias and higher MOI to promote a tighter downrange dispersion that leads to straighter drives.

Shot Shape Correction
More Control From Adjustable Perimeter Weighting
With a 16g sliding rear weight, golfers have extensive adjustability to promote the ball flight that they want to play. Combined with the OptiFit hosel, the Epic MAX provides up to 20 yards of shot shape correction.