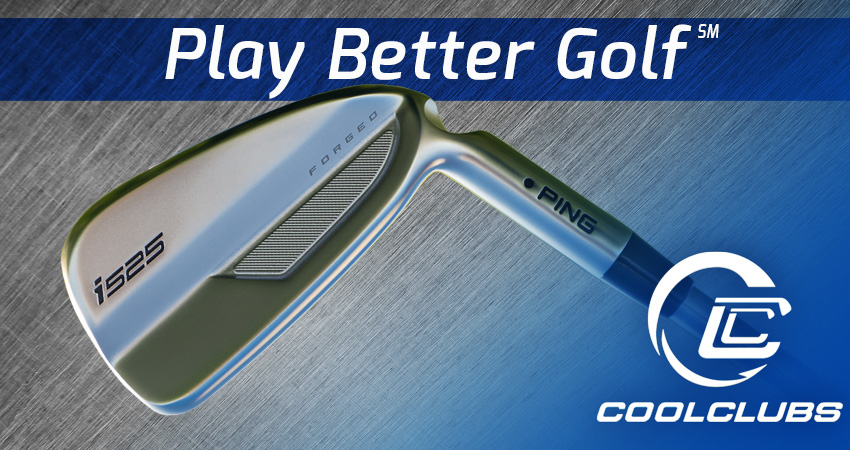 The forged, maraging steel face of the PING i525 irons have the sleek appearance of new clubs on the market and set a precedent on overall distance control and ball flight. PING deserves credit where credit is due for renovating a solid irons series and its innovations. The performance enhancements of this series help with forgiveness and a new feel on cavity backs that’ll help average golfers from tee-to-green. PING made the i525 irons longer than the i500’s without sacrificing lofts and other areas of your ball-striking game. With the i525 iron, the goal is to replicate the look of a better player blade with the design model based off the i210 series. The key features that separate these irons from the i500 and other PING models is it has more speed, Micromax grooves, enhanced feel, better launch conditions, increased MOI, and blade-like shot shaping abilities.

The improved clubhead speed comes from changes to the construction of the iron. With the i525, the club face is robotically plasma-welded to a 17-4 stainless steel body. The fundamentals of the construction aren’t uncommon in the player’s distance category, but PING made small adjustments to make the iron series more accessible for a wider range of golfers. The hybrid-like approach allows for more face deflection and room for error by giving the face more flexibility, unlike the blades designed by PING in previous models. PING was able to push more of the impact stress into the body which leads to greater deflection and more speed in a more controlled manner that helps create greater consistency. The increase in face deflection involves a variable thickness face that thins as you move towards the perimeter of the club. This gives the face a bit more flex and lead at impact for more pure strikes and added distance to both short and long irons.

PING has reduced spacing between the grooves so that they can add more grooves to the clubface. The benefit of Micromax is reduced fliers in the short irons and consistent spin rates with the longer irons to stick them on the green with your approach shots. Micromax helps balance the high ball speed potential of the i525 while featuring high trajectory and proper landing angle.

A milled groove pattern allows for tighter spacing and a geometry that provides four extra grooves to lower ball flight in the short irons and preserve spin rates in the long irons for improved consistency.

The feel of the PING i525 iron is the result of PING’s EVA polymer hot melt material. The feel is more consistent across the set ranging from gap wedge to 4-iron. Engineers at PING have described the feel as more of a pure impact sensation.

A polymer is inserted precisely on the inside of the face to improve sound while not giving up face deflection, the main factor in ball speed.

The i525 irons provide more consistent launch conditions and includes its Hydropearl 2.0 finish. The finish sheds moisture in damp conditions and closes the gap on launch and spin differences between wet and dry conditions. PING added more texture between the grooves, known as friction face, which further narrows your distance control with your scoring clubs.

The strength of the maraging steel allows for a thinner face structure with an internal sole undercut in the 17-4 stainless steel body to launch shots faster and higher with predictability due to the flex of the clubface. Combine that with a players-style model perimeter weighted to elevate forgiveness and deliver long, towering shots that hit and hold the green.

The players-style blade length creates a compact profile favored by golfers. The i525 iron is less bulky than the i500 series and the blade length is shortened. The irons are described as more balanced and with an increased MOI of 3.5% from heel-to-toe. This leads to tight shot dispersion, explosive launch and accurate descent angles to score low with your irons.

PING recommends the i525’s for golfers making the transition from game-improvement to player-distance irons. The well-engineered club allows for shot shaping and predictable shot dispersion. PING’S technology engineered to maximize face flexibility for increased ball speed and forgiveness for mishits low on the clubface.

Book your Cool Clubs fitting
for PING’s new i525 irons!
Book a Fitting