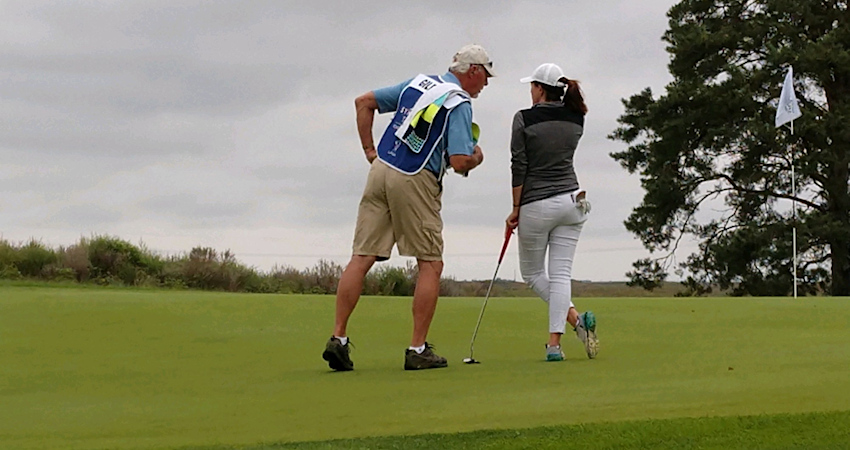 When your company culture is based on an unwavering passion for the game of golf, it’s extremely important to have the right kind of people working together towards a common goal. In this segment, get to know Emily Gilbreth – Cool Clubs staffer and Symetra Tour cardholder – and her opinions on the game, the importance of playing the right equipment and a few tidbits of advice for aspiring junior golfers who want to take their game to the next level.

Q. You were part of the University of Houston’s first women’s golf team before moving up to the Symetra Tour professional ranks. Obviously a tremendous accomplishment. How did your practice regimen change from when you were a junior through college and into the pro game?

A. Up until college my practice was the same. From what I remember it was a lot of summers spent on the range hitting balls. My dad would get one of those blue range buckets from the range vending machines and fill one of them up, drag it to the range and put it in front of me. That’s how I would spend my practice time until I was about 16. I was either working on swing mechanics on the range or I was playing.

When I got to college, that didn’t fly anymore. The college practice experience was extremely regimented and almost entirely focused on short game with an emphasis on statistics. We focused on hitting more greens in regulation and hitting more fairways; getting up and down from the right position and finding out how to miss correctly; getting those chips closer, like inside 10 feet. It was all math-based and based on brain science and finding the best way to engage deep learning. We would do advanced drills with a time limit which really challenged you to stay focused.

Those drills were a nice crutch to lean on as a professional. The muscle memory has been great. Remembering how far to hit a shot or how hard to hit a shot. That stuff is still in my brain from my college practices.

Q. What is the strongest part of your game and has it changed from when you were a youngster?

A. I’ve always been really good at getting up and down out of tough situations – ever since I was young. I would say another strong part of my game is my ability to shrug off bad holes. Not always bad shots, but I’ve made some big numbers and followed those up with birdies. I’m very proud of my ability to bounce back. Building strength is extremely important as well. When I got to college, they made us lift weights which is something I never really made a priority before. Building strength has really helped my recovery and makes it so much easier to get through those long weekends during tournaments.

Q. Now that you’re a decade or so removed from your junior/high school days, have you seen any changes in the level of competition at the junior level?

A. The level of competition has increased, of course. Junior competition now is very deep and I think that’s supported by the fact they changed the image rules so kids can be softly sponsored by companies – clothes and gear. That’s not something that was available to me as a junior. Even getting recruited by a college was really tough. It’s exploded in the last ten years or so.

Q. What was in the bag when you first started?

A. I know my brand was US Kids Golf and I probably carried a driver, six iron, putter and a wedge. My driver looked like one of those classic 90’s drivers with the blackout head and it had some titanium insert with the US Kids logo. My putter was also US Kids Golf and it was a blade. That’s probably why I started out with blades. I don’t really remember my yardages. I think the par 4’s I used to play at the First Tee growing up – that average yardage was probably be 320 from the back. That course was around 5,000 yards or so. The goal was to keep the ball in play and hit it far enough to score.

Q. How does equipment choice impact the game of a junior player compared to a high school player or competing professional?

A. First, you have to like what you’re looking at or you won’t feel comfortable over the ball. And, obviously, the right shafts in your golf clubs are of the utmost importance. As you become more competitive, equipment matters. Golf is not about being perfect, it’s about managing mistakes. With new technology that comes out each year, you can make those margins of error smaller which is good because mistakes become more critical as you grow in competition.

I remember times in my career where I was playing with the wrong equipment and I could not figure out what was going on. I would grind and grind on the range and talk to swing coaches and spend hours in front of the mirror trying to figure it out. Then, I found a way to get into the right equipment and realized it wasn’t necessarily my swing or my game that was the problem – the equipment was holding me back.

In some cases, especially if you’re driving yourself crazy with swing changes and you’re not seeing results, it’s most likely the club and the shaft.

I would say at the professional level, it’s even more important to have the right equipment in your hands. Even if you have all the talent in the world and all the skill in the world, if you’re swinging the wrong club you’re not going to be able to produce consistent results.

Q. What was the college recruitment process like and what can young players expect to go through during that process?

A. College coaches will start recruiting you when you’re a junior in high school – or rather – that’s when college coaches can start contacting you directly.

My story is unusual. After going through college and talking to other athletes, we all found out there is no normal experience.

I verbally committed to a university who then rescinded their offer in order to get a transfer player. Not exactly one of my favorite memories. I ended up at the University of Houston because a friend of mine turned me on to the idea. I simply reached out to them and ended up going there.

I went through the entire recruitment process – made visits to multiple schools and with all that work I still lost my offer the week before signing. I always tell people if it doesn’t feel right, don’t commit to it. You do not have to. I was so young and didn’t know better and it didn’t feel right and I did it anyway.

Some people had it easier. Some people had it harder. But we’re seeing the recruiting process starting younger and younger. They can’t contact you earlier because of collegiate regulations, but they are following you through Blue Golf and other sites that keep track of junior events. Stay the course, keep playing, but most importantly, have fun playing the game.

Q. Do you have a favorite moment in your golf career?

A. I have a couple. In 2011 I got to play Bandon Dunes in the last USGA Women’s Amateur Publinx Championship they ever had. I got to play in a skins game at the AT&T Pebble Beach Pro-Am with Mark O’Meara and I got to play for money for my First Tee chapter. I got to be a part of the first women’s program at the University of Houston. We were the first conference champions for the program as well. During that tournament, I shot 72 the last day in very difficult, horrible Florida conditions. We were right on the ocean with 25 mph gusts and the greens were ice. We were all really tired but we pulled it together and I still have that ring somewhere.

Q. If you could do it all over again, would you change anything?

A. I’m certainly not unhappy with where I ended up. Of course, I wish I could get in a time machine and stop myself from playing a whole season injured. I still learned a lot from that year even though I couldn’t give 100 percent and it’s led me to a place where I have an opportunity to work in the industry. I realize now golf isn’t just about playing. There’s a whole group of people who are passionate about building clubs and helping people Play Better Golf. I’m grateful to see that up close and I’m happy to go to work every day and learn something new about golf I didn’t know before. I’ve been playing golf for 20 years and I’m still learning something new every day.

Q. What advice would you give to young women golfers who are either just starting out or have been in the game for a while?

A. I heard this somewhere else, but it’s basically boils down to this: if you’re a woman who plays golf and you’re high handicapper, don’t be embarrassed about that. You’re still a huge part of the game. And remember, it’s supposed to be fun.