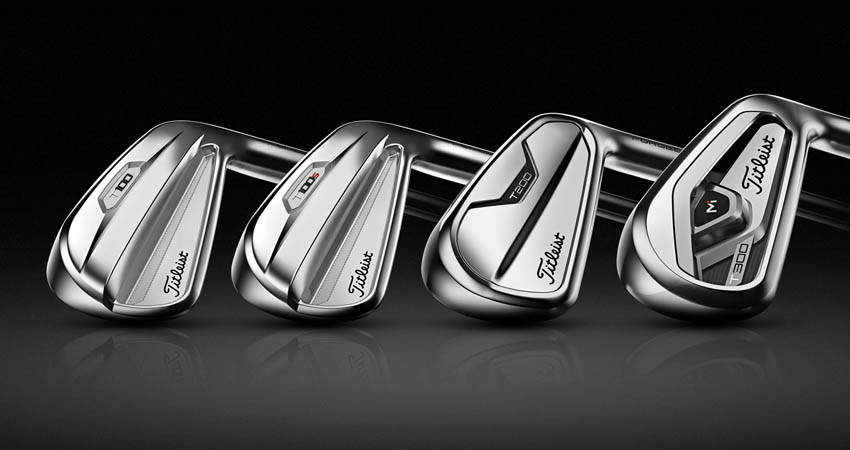 The new — and extremely popular — Titleist T Series irons are here and available for fittings at your nearest Cool Clubs location. Titleist opted for the “if it ain’t broke, don’t fix it” mentality, making only subtle changes to the four iterations (T100, T100S, T200, T300), but that’s not to say the new line isn’t an upgrade from previous lines. It is, but radical departures were not in the cards this year and probably unneeded for Titleist’s signature line.

Let’s dive into what you need to know about the new T Series irons from Titleist.

The new Titleist T100 can best be described as “blade-like” with a thin topline, a touch of offset and forgiveness built into everything but the short irons. The biggest change from previous models comes from how the iron is constructed. Titleist calls it “continuous face construction,” meaning a single piece of SUP-10 steel wraps around to the back of the club, effectively moving welds away from the face.

On the forgiveness front, you won’t be surprised to see brazed – not welded – tungsten weighting in the 3-7 irons which leads to a more precise center of gravity placement and overall tighter construction consistency. The new T100 should spin a little more than previous models, and features a new variable bounce sole thanks to working with the Vokey wedge team.

As for the T100S, you can expect it to look and feel extraordinarily similar to the T100 with the small exception of a small muscle channel in the back cavity and two degrees stronger lofts throughout the set.

Originally designed to help the mid-handicap golfer hit the ball farther and straighter, the new iteration of the T200 represents the biggest YOY changes in Titleist’s new line. The new T200 features a shorter blade length, less offset and a thinned out topline and sole. We welcome back the Max Impact Technology of last year’s model, but it’s less obvious in the design this year.

Speaking of tech, the T200 features a lot of it. The multi-material construction is comprised of a 17-4 steel frame and features a “Muscle Plate” back piece made of polymer with rib structures designed to improve sound and feel.

The T200 is a solid choice for the middle-of-the-road player and should prove the longest and most forgiving Titleist iron within that category.

While the T200 sits on the fence between mid and low handicappers, the T300 is firmly within the game-improvement sector of the market, touting more distance and plenty of forgiveness. And compared to both the T100 and T200 which are relatively compact, the T300 clubhead is significantly larger without going overboard on oversized.

Titleist kept a little bit of the Max Impact Core technology on display – unlike the T200 – and implemented a variable-thickness face which tapers to a thinner heel, helping create faster – and more importantly – consistent speeds across the entire face.